Skagway is a “port city” where the cruise ships come. We were on an Inside Passage Cruise on Princess Cruise Line in the spring of 2007 with 30 of our friends from El Paso. Again this trip we took the White Pass & Yukon Route narrow gauge railroad train from Skagway up the mountain to the White Pass Summit, elevation 2,865 ft. We just touched in Canada again, and then came back down the mountain. The ride traversed several bridges and by-passed the old steel cantilever bridge, which was the tallest one in the world until it was decommissioned in 1969.

You go thru 2 tunnels over the 20 miles each way. Since there were 51 of us on our tour we filled up an entire railroad car. It has seats that the backs flip over so you are facing forward both ways. They had us exchange seats with the people in the opposite side of the train so both got to see the views from both sides. It was raining and cold most of the trip so we spent very little time on the outside platform at both ends of the railroad car. Check out the pics.

Click here for pics of Skagway and the Train

As I said, Skagway is a tourist town, 2,500 inhabitants in Tourist season, and 500 in the dead of Winter. Everyone else goes to Arizona for winter. They cater mostly to the 2 to 4 cruise ships that dock here each day. From the gem stores to trinket shops, railroad ride to zip lines, gold panning to white water rafting to helicopter rides to plane rides for the glaciers. We did many of these on our cruise so we didn’t partake this time. From the video’s and talking to everyone we would have liked the zip line as it traversed several waterfalls and sounded better than the one we did in Costa Rica.

Friday night after an excellent Salmon dinner down by the wharf, we went to the “Day’s of ‘98” show. First was gambling at the roulette or black jack tables with “Soapy’s” money, 1,000 to start. One of our group parlayed that start to over 50,000 within the hour. He was honored before the start of the show. The musical production was all about Jefferson Randolph “Soapy” Smith, who was a con-man and soap salesman and respected bar owner. His rein only lasted 8 months before his men robbed someone of their $2,800 in gold dust, and in the ensuing gun battle Soapy was shot in the heart and died instantly. He was 38 when he died in 1898 during the gold rush to Alaska. Two of our group were picked to participate in the show and it was a hoot. I will try to post some video when we get a decent internet connection. 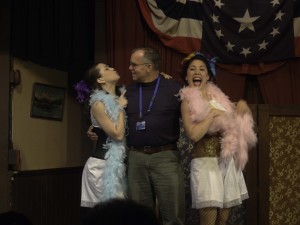 The cell phones don’t work at our campground, nor does the internet or satellite TV or Sirius-XM radio and the cable TV connection only gets one fuzzy kids channel. We have been back in the 50’s electronically since leaving Calgary.

Today we did some work on the coach, some laundry, and slow internet in an internet café downtown, shopping and dinner at an outdoor fish market that had excellent Halibut.

Tomorrow we head out for a Fjord Express ferry to Juneau, an all day excursion, and then on Monday we head back to Canada for an overnight in Whitehorse.