Day 13. We left Dawson Creek, Alaskan Highway Mile Zero headed northwest to Ft. Nelson, BC. Along the way we drove thru miles and miles of burnt forest on both sides of the road. Sad, and the locals told us the area used to be big logging of the forests and to thin them out but now Ottawa, the capital, won’t let them any more. So lightening strikes cause massive fires that won’t go out until winter. The road is getting rougher the farther north we go. Still Hot in Canada. There is a museum in Ft. Nelson, next to our RV park, with old cars and memorabilia from building the Alaskan Highway. We drove the 5 or so blocks of town and found a nice grocery store and bought some items. The campground was privately owned so we had full hookups, with 30amps. Our site was not level and the front tires were off the ground when we leveled it. In the morning we fueled up and was going to have the coach washed but it was forecast to be raining all day.

Day 14. Liard River Hotsprings, BC. On the way to Laird we stopped a the “Cinnamon Bun Center of the Galactic Cluster” at the Tetsa River Campground, and Toad River Lodge where over 8,000 hats are nailed to the ceiling and walls of the restaurant. Quite a sight. We are camping at another primitive Provincial Park. No hookups at all, dry camping as it is known, and you can only run your generator from 6-8pm. It was a little easier to get into than the other Provincial Parks where we have stayed, but we had to pull far in between the trees in order to level the coach. The refrigerator will not work if it is not close to level and we don’t want to defrost yet. We were told there are only two seasons in Canada, Winter and Construction. We know why now. It was only 191 miles to Laird Hot Springs but took 7 hours or 27.3mph average. Many, many miles of “follow me” lead cars, after waiting a half hour for it to turn around and come back for the next group. They don’t do much in the way of blacktop re-paving; rather “chip & seal” where they put down small to medium chipped rocks and seal it. For miles, and miles. Then the trucks, RVs and cars pound it down. These are 30mph zones for a reason. Rocks fly. The group has had several windshields chipped or broken so far and we are only on day 14 of 60. At the campground the Hotsprings are a short walk down a wooden boardwalk, which was nice. Three different pools with temperatures from hot, to hotter to scalding. 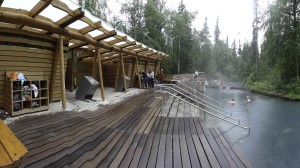 This is a sulfur hot spring so it smells of rotten eggs.   Tomorrow to Watson Lake. Still haven’t seen any wildlife, other than one lone Bison sauntering down the shoulder of the highway. At least it has cooled off with the rain today. Click here for pics of Liard Hotsprings

Day 15. Watson Lake, Yukon Territories. It rained all night, not hard but constant. For the first time we used the inverter which turns the 4x6volt batteries to 110volt electricity to run the Cappuccino machine and the microwave. Worked great. We can’t start the day without our Cappuccinos!   There were many Bison on the road to Watson Lake. Pretty drive, but it could have been Colorado, but CO has much better roads. We set up in the rain at the Downtown RV Park. It is an ok park but no Wi-Fi even though it is advertised. Later we walked over and met the group at the Sign Post Forrest to put up our group sign. There are over 80,000 signs now in this “forest.” Funny place. Signs from all over the world. One sign that stands out is “Welcome to El Paso”.  Click here for pics of Watson Lake 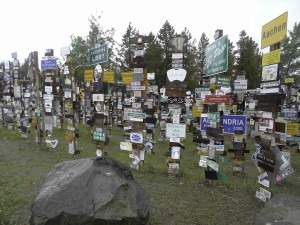 Tomorrow we head on up the Alcan Highway to Teslin.

Day 16. Teslin, Yukon Territories. The campground was nice, with a view of the lake, but we had to go to the office for internet, and one hour limit at that. It rained off and on all day and night. We had S’mores around a campfire and turned in early.