The drive from Tok was a breeze. Like a super highway even, and we could even use our cruise control, the first time since before Whitehorse. The end of the Alaska Highway is at Delta Junction, AK, about 90 miles southeast of Fairbanks, because there was a road from Fairbanks to Delta Junction at the time the Army Corp of Engineers built the Alcan highway, all 1,422 miles of it in 1942. 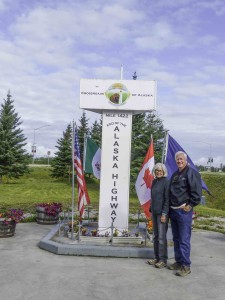 Fairbanks is the third largest city in Alaska but only 32,000 people live here, and many are only here for the non-Winter months. They say there are 5 seasons here, Winter, thaw, construction, freezing, and Winter. Only 3 hours and 41 minutes of daylight on Dec 21st. But it is light here in August until almost midnight we are told, but doubt if we will stay up to see that. The longest day in June starts at sunrise, 2:58am and sets at 12:48am the next day. Long day! It reminds me of the Al Pacino and Robin Williams movie, “Insomnia” from 2002. Rent  it as it is a hoot watching Pacino trying to get some sleep in Alaska in June.

Tonight after arrival, we went to a Salmon Bake at the Pioneer Park, then walked around and looked in shops and old buildings moved here from downtown Fairbanks. 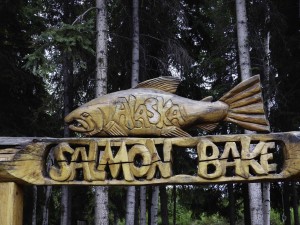 Afterwards we were treated to a vaudeville type show, singing and dancing, telling the story of early Fairbanks. It was born out of one persons dream, and one miners gold nugget pouch. The news spread and by 1902 the town grew only to find out there was not much gold and the dreamer absconded with the money in his bank, or so the story goes.  It was named after the 26th Vice President of the United States, Charles W. Fairbanks from Indiana who served under President Theodore Roosevelt.  Today it is big enough for 2 Safeways and 2 Meyer’s stores and one Wal-Mart.  There is an Air Force base and an Army base here, both close to where we are staying just out Fairbanks in a town called North Pole, AK.