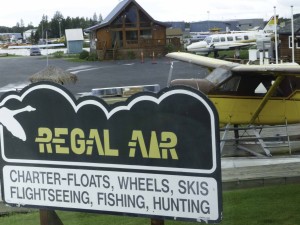 Anchorage population is 350,000 or half of all of Alaska’s population. Think about that for a second as Alaska is much larger than Texas!  It stretches 30 miles north and another 30 miles south of the city proper. It is a big city but not as up to date as you would expect. Many stores have limited stock and many items were out of stock. But we did replace our carryall Sony point and shoot camera, which quit at a previous stop, after over 34,000 pictures. The replacement is a Canon G7X which has some cool features but limited battery life and zoom range. It was the last one in Anchorage and no extra batteries could be found anywhere.

The first day we had a bus tour of the city and it was interesting. The tidal basin raises and lowers 39’ and the receding waters go out for miles. They warned us not to go out on the basin as it is like quicksand.

The Ulu factory was doing a lot of business as the Ulu’s were flying off the shelves. They are curved knives with a handle at the top. We saw them in use the second day at the Alaska Native Heritage Center when they were using an Ulu to skin a pelt. 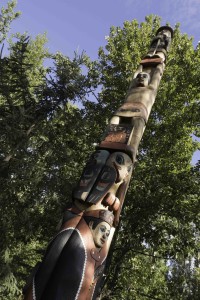 At the center we saw native games they play to stay in shape for the hunts and winter, huts built into the side of hills for warmth and how they make kayaks out of skins and lumber. One of our stops was at the seaplane base. There are more small aircraft, either with floats, skis or fat tundra tires in Anchorage and Alaska than in the rest of the USA combined. Since there are only 10 highways in all of Alaska, and none really west of Anchorage, the main mode of transportation is by small plane.

One couple in our group went for a seaplane ride to a remote lake for a day of Salmon fishing and they caught their limit. When returning the plane hit a sand bar on takeoff and the floats sank. That took an extra 2 hours to get the water removed from the floats and back on their way. It could have been a lot worse.

We tried to go for a bike ride on one of the many trails in Anchorage, but unfortunately someone who parallel parked behind us at a previous city had bumped the bikes and Sandy’s front wheel was toast. So we dropped off our riding companions for their 11 mile ride along the coast and we went to the Trek store for a new wheel. We washed the Ford F-150 by hand as it was filthy and visited the Ulu factory again for our purchases. After their bike ride the four of us had lunch at a place the tour guide had pointed out that hadn’t changed their décor in 30 to 40 years. Quite funky.

Safelite came and repaired the chip on the windshield of the Dutch Star and she smiled at all the broken windshields and chips in everyone’s glass. She said she was #1 chip repairer for all of Safelite and I can believe it. She was fast and efficient and was drumming up a lot of business in the park.

We had a staff prepared dinner one evening where we finished our Ladder Ball competition. Sandy went to the semi-finals and it was highly competitive.

We are ready to move on and tomorrow we are headed to Seward, AK which is only 127 miles southeast of here on the coast.