The campground, Pioneer RV park, has a lot of issues. Power is intermittent for some sites, none in others, some have good water, some don’t. Some have cable TV, but most don’t. All have some weird Y pipe for the shared black water and all sites have shared fresh water. There are other issues, like strange concrete slabs in-between sites that you can hit, no place to park tow vehicles and you are parked side by side, opposite facing with about a 12’x40′ spot. The redeeming values are it has decent Wi-Fi, but limited to 300mb per day, it has a fueling station in the entry and a real car wash with soap and brush. A rarity in Canada. So we washed the F-150 but like everyone else couldn’t get the layer of “seal” off from the “chip & seal” road repair. So sometime down the road in the lower 48 we will have get a real car wash and clean both the Dutch Star and the F-150. And get a new windshield on the F-150.

After we arrived we went to a Frantic Follies review downtown that evening. Same as Dawson City and others on the trip. More Yukon jokes and history.

The next morning we went on a guided bus tour of Whitehorse and surrounding areas. The town has an interesting history with the White Pass & Yukon Railroad stop that was built for the gold rush of 1898. The history of the steam paddle wheelers that operated downstream, but going north, to Dawson City was fascinating. 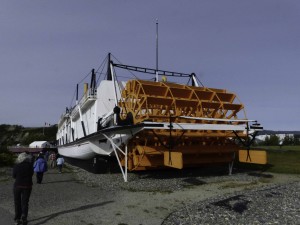 We visited the SS Klondike that is preserved and stocked like it was ready to head to Dawson City. We went to the salmon ladder on the Yukon river where they built a trough for the migrating Salmon to go upstream around the dam. In the non-winter months the dam supplies power to the city, but freezes in the winter so they rely on a diesel and LNG generator for many months of the year. The pricing spikes during those months. The downtown was all of 6×6 blocks square.

The crowning beauty was the first night/early morning. We were told the Northern Lights would be visible that night. So our wagon masters got on the walkie-talkie at 1:30am to say the aurora borealis was starting to show. Several of us got up and went out for the show. By 2am it was in full glory. What a site. 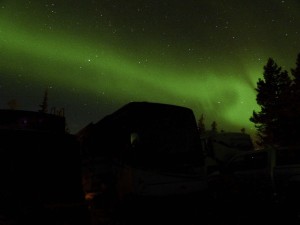 The green glow was actually south and west of us. Then the curtains started to the north and east. They really do “dance” or as Sandy called, a slow waltz. I had my tripod out and tried to take pics with the new Canon, but could not get anything. So I tried the Panasonic FZ200 and it worked great. f4 @ 30 seconds worked out the best. I got some great shots of the green glow and the curtains.

Click here for pics of Whitehorse. The show only lasted for 30 minutes and then it was gone. According to the aurora borealis website, http://www.auroraborealisyukon.com/auroracast/ we were supposed to have an even better show, rated 7 of 10, the next night but another front moved in and it started to rain Wednesday evening. It is still raining on Thursday, and the forecast is for rain the rest of our tour, all the way to the end. Maybe it will stop as we get closer to the lower 48.

Anyway, we enjoyed our short stay in Whitehorse, mainly because of the once in a lifetime experience of seeing the Northern Lights. The next three nights, here and in Teslin and Watson Lake, are also predicted to be better showing, if it ever clears up.