We hated to leave Homer as the day started out beautiful after raining and windy for two days. But, being on a schedule we had to leave for Palmer. Back up thru Anchorage, another beautiful day and drive. It rained after we arrived in Palmer we had a pot luck and you grille night. Lots of fun but of course it rained. The next morning we left for Valdez. The ride was bumpy and floating in some spots. The 5th wheels and smaller Class C and A had issues with the bumps and floating. For everyone the weather was beautiful and we had several great photo opportunities. The Mount Wrangell and St. Elias National park were picturesque with a huge lake in front. Horsetail and Bridal Veil Falls were bathed in sunlight but not flowing like spring. Valdez and the surrounding mountains average 27 feet of snow per year. So the spring run-off is no doubt spectacular.

The second day the group went on a 9 hour boat ride in overcast weather out Prince William Sound to Meares Glacier, which calves into the ocean. Sandy was under the weather so she stayed in the coach to recover. The next day she was much better. The boat captain was entertaining as well as informative. Along the way we saw eagles, both Golden and Bald, Steller Sea Lions, Humpback Whales, Sea Otters, Harbor Seals and Dall’s Porpoises. The other birds we saw were Horned Puffins, Murres, Cormorants and Black Oystercatchers. 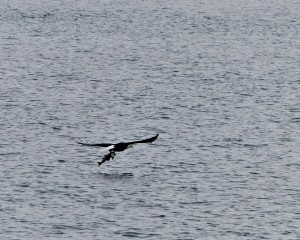 We saw the Valdez oil terminal, all 18 storage tanks that hold up to 11 million barrels of oil and the 4 tanker docks. The captain pointed out the shipping channels and where the Exxon Valdez ran aground at Bligh Reef, as in Captain William Bligh of Mutiny on the Bounty who explored these waters. The real reason it ran into a sand bar, we were told, is they were changing channels to avoid icebergs and the 3rd mate who was at the helm didn’t realize the ship was on autopilot. By the time he realized that it was too late and they ran aground and ripped 5 of 8 storage compartments. It takes miles to change course on ships this size. Mother nature and cleanup lasted a few years after the 1989 disaster and it looks pristine now. They have put in many safety items including mandatory pilot boats, cleanup and containment barges, etc.

The Meares Glacier is one of many in the region and is the only one around Valdez that calves, or breaks off, into the Ocean. We heard many sounds from the glacier, but no major calving. Just outside the Unakwik Inlet that leads to the glacier was the epicenter of the Good Friday 1964 earthquake. It was a 9.3, the highest recorded in the US and second highest in the world. It sent 100 foot tsunami into Valdez, the times and wiped out the city which was built on marshland. The town was condemned and rebuilt just north on bedrock. In all 138 people lost their lives in Alaska, Canada and the lower 48 states.

The day was long but enjoyable. The next day it rained off and on and some went Salmon fishing. We toured new and old town Valdez and saw a black bear fishing in a stream in old town Valdez. There are some foundations still standing, otherwise just signs as to which businesses were located in old town. 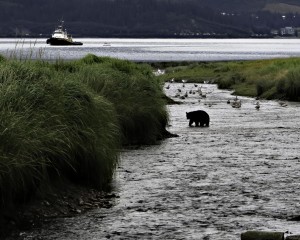 Tomorrow we leave for Tok, AK. Heading north to then go south into Canada on our way to the lower 48.