Our first stop in Canada was Fort Steele, BC. The drive was about like driving thru Colorado before the mountains. The border crossing into Canada was interesting. With 24 rigs going over about the same time the difference in questions from the Canadian Customs varied from firearms & how long (us), to what fruits & vegetables do you have, to full questions and opening up all slides and basement doors.

Back to Mountain Time Zone in Fort Steele. We stayed at a nice camp with 30amp hookups and no wifi to speak of.

After setting up camp we walked about a mile in 90+ degree heat to the old Fort Steele. It was established during the gold rush days of 1860’s and was originally named Galbraith’s Ferry. After some land and other disputes were settled by Superintendent Samuel B Steele in 1888 the town petitioned the Dominion Government to change the name to Fort Steele. The number of residents ranged from 11 to over 1,000 at the peak of the silver, lead and coal boom. They established 11 hotels, 4 restaurants, 4 general stores, a hardware store, a brewery and drug store, tailor shops and barristers. The boom lasted until the railroad bypassed Fort Steele and instead stopped in Crainbrook, about 10 miles away. By about 1910 Fort Steele was in a bad state of affairs. It declined until the 1950’s when restoration was started on the fort and now being restored they have people walking around in period costumes and re-enacting 1800’s history. 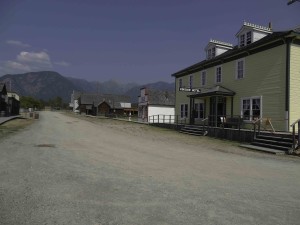 Click Here for pics from Coeur d’Alene and Fort Steele

If you click the > at the top right it will give you a slide show.

Tomorrow it is off early to Calgary AB

Road from Fort Steele to Calgary

Beautiful drive following a river thru the hills. Some people saw a bear, big horn sheep and boars. When the road turned north again, we saw a number of bright yellow canola fields which is a large crop in Canada.

Stay tuned, and I will try to find a hot spot to upload the pics and this post. Wifi hot spots are hard to find other than the big cities like Calgary.