With any RV, new or used, there will be things that go wrong. Some are serious, some are just funny. I’m sure everyone have their observations on crazy things in an RV.  Some of the crazier things we have run across so far are:

We were driving on the ring road, I-465, in Indianapolis during rush hour, dumb. So we were creeping along, stop and go, and a guy in a work truck pulled up along side and said our “Newmar” sign was hanging low on one side. We could not pull over to inspect, but were worried that the air suspension had a leak, although the air gauges said all is well. So when we got to the campground we inspected the “mud flap” with the Newmar name on it. Seems it has a system of 4 chains in two V shaped sections, to hold the mud flap in place, and the left side had one broken and was gone, leaving the mud flap to drag on that side. We couldn’t find any large zip ties so Sandy sacrificed a metal coat hanger and we “fixed” the problem, temporarily until we get home. Note to self, bring some zip ties and the cordless drill. Update. The coat hanger broke so we had to zip tie it. Another temporary fix. 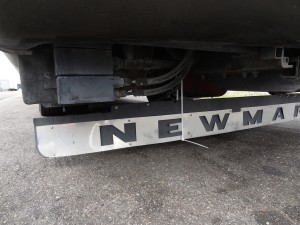 Another thing are the speakers for the Pioneer/Sirius stereo.  The right side speaker kept getting worse and worse. Finally it sounded like scratching, so I decided to check it out, thinking we may have to replace the speaker. I removed 4 screws and took the speaker out. Sawdust flew out. The speaker was full of sawdust. So was the area above where the speaker was mounted. Seems the installer, an aftermarket install by a previous owner, hadn’t bothered to clean out the sawdust when they drilled the hole for the new speakers. It works great now without the sawdust.

When we were driving from St. Louis to Branson on I-44 it was pouring rain. It sure sounds LOUD on a full RV windshield, cleans off the bugs anyway. I had slowed way down and heightened my defensive driving. Driving along, minding my own business, all of a sudden the driver’s side windshield wiper blade falls off and is just dangling as the wiper arm continued its duty. We turned off the wipers and at the next exit found a covered gas station and reattached the wiper blade while under an awning.  Getting out of the gas station would have been difficult if we were towing the Camry. We would have had to detach and reattach, in the rain or found a different place to do the quick repair.

Ever have to move the coach, after getting all set up. Twice? Forward then backward. All because the campground didn’t have a decent cable TV- mostly snow on the TV. The tree was exactly in the middle side of the parking spot, on the south side. So when we deployed the DirecTV Winegard dish, it pointed directly at the tree. Took everything down, moved forward 10′. Same thing. The tree was still in the way. So, moved back 20′ and set up again. Worked this time. Nice to have a 90′ pull thru! Ah, the perils of RVing. Need our Diners, Drive-Ins and Dives on the Food Network!