Yup, the drive was as bad as predicted. We got to the ferry right after it opened at 7am so we had a short wait. I will post a video of the ferry crossing soon, and Sandy took photos as she was waiting to get on the ferry with the Ford F-150. Quite a sight. They put our 40’ Dutch Star and a 45’ Newmar Ventana and 2 cars/trucks on the same ferry. It only took about 10 minutes to cross, but some of the group that showed up much later had a 3 hour wait to get on the ferry for the 10 minute crossing. Many had to wait for commercial trucks to be loaded ahead of the RV’s, as they have priority. We did 20mph a lot of the way across the “Top Of The World” (TOTW) highway. It is like a mountain farm road, gravel sometime, dirt sometimes, mud sometimes and some chip & seal. Lots of ruts and pot holes. Lots of CruiseAmerica and CanaDream Class C’s coming at us form Chicken and they don’t know how to drive them as they are rentals. Made for interesting passing.  We would just stop and let them pass. I’m sure they were sweating with each of our 24 rigs they passed.  Everyone made it ok, but we arrived at 12:30pm, gaining one hour in Alaska, and the last RV’s and the Tail Gunners arrived about 5:30pm. We saw a herd of Caribou at the very top of the road and took a few pics. They were several hundred yards away but you could see very tall antlers with lots of points. Many said the herd was on the road when they passed. The interesting thing is when we got to the US border the US has paved 14 miles past the border with really, really nice asphalt.  The problem is it was another 38 miles of really, really bad road to Chicken! Guess someday they will pave it all the way to Tok, which is an additional 68 miles to the Alcan highway before Tok. Could they pave the entire TOTW highway? Sure. Do they want to? Obviously not. The roads in upper BC and Yukon could be fixed also, but guess they just don’t want to. All “chip and seal” does is seal the dirt to the sides of your motorhome and toad! 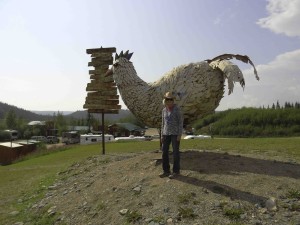 Chicken is a town of 3 full time residents. A postmaster and her husband and one curmudgeon. The others are snowbirds that leave from Nov 1st to April 1st. To Tubac AZ, no less. The Chicken Gold Camp owner said it gets to -20 degrees before they leave. The record low is -80 set back in the 30’s. The camp itself is nice. It is built fairly flat in a large open area, on top of the mine tailings. It only has 20amp service because they are “off the grid” and have to have a generator for electricity. No water or sewer in the campsites. Trash, and gray and black water have to be hauled out as this is on permafrost. 20amps is ok to keep the refrigerator going and lights. We turn on the Hydro-hot water on diesel for hot water and to heat the coach. Works well and doesn’t use electricity. The generator also would work for powering the coach, but we just use the invertor to convert the battery power to 110v so we can have our Cappuccinos in the morning. 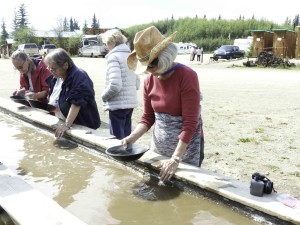 While in Chicken we were taught to pan for gold and went on a gold dredge tour. The panning is a pain in the back and for very, very little specs of gold dust.  We passed many gold claims along the way to Chicken. You could tell them as they marked 4 corners with carins, stack rocks basically.  The dredge was fascinating.  Not OSHA compliant at all, but it operated from the early 1900’s to 1967. The noise would have been deafening. 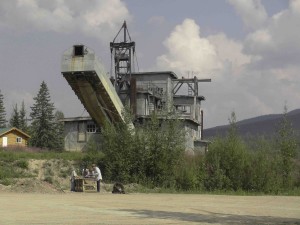 See the pic of the dredge close by. And it was dangerous to walk around. The life expectancy of an “oiler” job was not long.  The would mine down to 58 foot thru gravel to the bedrock where the gold would settle as it is 19 times heavier than water.  We were told it mined about $600 million worth of gold nuggets over it’s lifespan. The largest found by the rig was 50oz. The worlds largest gold nugget ever found in this area was 297oz, or about $330,000 in todays gold price. They are sill mining for gold but with more modern equipment. The Chicken Creek Campground owner says they pull out up to 800oz of gold per year on their claims in the past and just starting to work the claims again with their daughter and her miner fiancée.

We are off to Tok tomorrow. Another 78 miles of bad roads. Stay tuned and I will post some pics when we get a good internet connection in Fairbanks.